Greek Myths and Legends of Zeus

Greek myths and legends of Zeus, explored and explain.

Zeus is said to be the youngest son of Titans Cronus and Rhea to whom divinity was ascribed; Greek mythology has it that Cronus would rule over the universe. It is said that Zeus was destined to overthrow his father. A number of myths and legends exist pertaining to his birth, childhood and older years.

According to legend, Zeus was secretly protected by his mother when he was born because his father intended to kill him to avoid having the prophecy accomplished. Sent away by Rhea, Zeus was brought up by the goats Amalthea and Melissa who were assisted in this endeavour by soldiers and smaller gods, all of whom would make sure that his baby cries would not be heard by Cronus.

Legend also says that other beings contributed in raising Zeus, including the nymphs Adamanthea and Cynosura, and Gaia, Mother Earth.

Upon reaching adulthood, Zeus planned to fight Cronus; this happened in a battle named The Titanomarchy. One of the major events marking this war is that Zeus forced his father to release his siblings who were swallowed by the latter after their birth; divine beings Hades, Poseidon, Hera, Demeter, and Hestia were, thus, ‘born’. This is why Zeus is, sometimes, called the eldest child of child-eater Cronus. 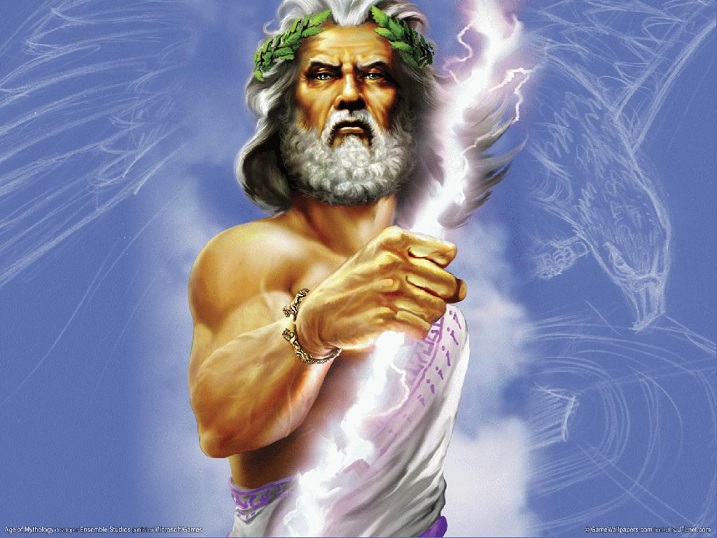 Zeus is often depicted as a bearded man bearing a thunderbolt. He has inspired hundreds of works of art, and he continues to do so.

The Titans were ultimately defeated by Zeus with the cooperation of other beings; by that time, he had been declared ruler by his siblings, and his side was called the Olympians.

In the aftermath of this great war, Zeus earned the power of thunder for which he is famous: he was given thunder and the thunderbolt as gifts from the Cyclops who were also liberated by him.

Following the fall of the Titans at the hand of the Olympians, Zeus assigned his siblings with different roles: he became the main sovereign with the sky and the air under his rule while Poseidon was given the earth and the sea, and Hades, the underworld.

Apart from his apparent heroic deeds, Zeus became notorious for his many romantic involvements: despite being married to Hera, he would fall in and out of love with many other women. He might have been a courageous ruler, but he was also cunning enough to try to hide his affairs from Hera.

Among his progeny are Ares, Hebe, and Hephaestus (whose mother was Hera), and of course, the famous Hercules and Aphrodite.