Legends and myths surrounding the lost city of Atlantis – Atlantis, a legendary ‘lost’ continent or city, will often be mentioned in fantasy stories. It has inspired writers and philosophers throughout time. It is often associated with amazing stories of utopian civilizations and explorers setting out to land there.

Have you ever wondered as to the origin of Atlantis? Why do we talk about the lost island-continent of Atlantis, and from whose mind did it bud off? Legends are usually mysterious because we cannot fully trace their source. Thankfully, though, this is not the case for Atlantis. It began as a story told by Plato, in his dialogues named the “Timaeus” and the “Critias,” dating back to around 330 B.C.

2. Atlantis and its Evil Rulers

What’s interesting is that the Atlantis you’re familiar with is very different from the one conceived by Plato. We might think of Atlantis as a utopian city, with open-minded people and technologically-advanced tools, but that’s not how Plato initially narrated it. Rather, it was quite the contrary in terms of the morals of its people. We have the technology part right, though. So, originally, Atlantis was this continent gifted with sophisticated technology, but with an evil empire at its head, with one goal: conquering the world populations.

3. The Heroes of Atlantis: Ancient Athenians

However, the Earth was not left without guardian. A small group of individuals described as being spiritually pure came together to stop the evil plans from being executed. They declared war against the wickedly-ambitious empire, and defeated the latter with their super-spiritual powers. They were the Athenians.

So, Atlantis started off as a platform to elaborate on the heroism of the Athenians, and not as a sunken-lost-ancient-civilisation story.

4. Later Myths: Atlantis Has Its Place in History

The original concept of Atlantis has recently been distorted. Back in 1881, writer Ignatius Donnelly came up with the idea of describing Atlantis as a lost historical continent. According to him, Atlantis actually existed. His writings mention it being the source of great accomplishments like agriculture and language— subsequent civilizations later took on this knowledge from the people of Atlantis. Donnelly argued that it would have, otherwise, been impossible for them to have acquired the levels of sophistication documented in real history.

5. Who furthered the myths?

Donnelly’s works became an inspiration for others. More stories were concocted in the later 1880s and in the 1920s and 30s. These years witnessed plenty of myths added to the bulk.

6. Past lives in Atlantis

Edgar Cayce who became a notorious psychic back in the 1920s invented the idea that people of his time had lived their past lives in Atlantis.

Cayce had also predicted that Atlantis would be found in 1969— something which obviously did not ever happen.

8. Atlantis and the Bermuda Triangle

The author behind a 1969-book entitled “The Mystery of Atlantis”, Charles Berlitz, was also convinced of the existence of Atlantis. He ‘explained’ that the Bermuda Triangle myth was the result of occurrences attributed to Atlantis.

The Atlantis legend must be one of the most famous ones worldwide. In spite of repeated explanations of it being just fiction, people from far and wide still believe that there must be some truth to the legend. Many are those who have claimed to have discovered the location thereof. 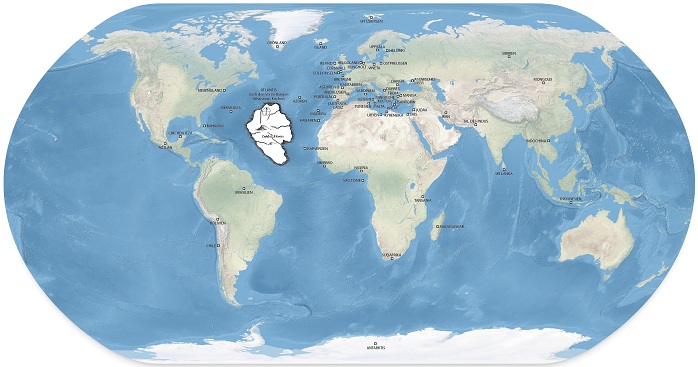 10. Atlantis located in the Carribean Sea

Some ‘discoverers’ of Atlantis have associated it with Antarctica. Yet others have mentioned the Atlantic Ocean and the Caribbean Sea. Surprisingly, countries like Germany, Turkey, Malta, and Bolivia are also said to be the location of the lost city. On the other hand, scientific data shows that Atlantis could not even have existed because continents have drifted apart over time, without signs of contraction, and quite the contrary, the seafloor has expanded. Atlantis could not have sunk anywhere. Nor does archaeological research ever hint at the existence of a civilization called Atlantis.

So, the lost city of Atlantis was never lost to begin with— simply because it never existed in reality. Only in the fables of Plato.