The myth that the 13th floor of a building is unlucky and dangerous is a popular one. You will find that many hotels and other buildings do not have a “thirteenth floor”. They, of course, literally have one, but they do no designate it with the number 13 because the latter is believed to be unlucky. Let us now delve deeper into the reasons as to why having a 13th floor is considered bad omen! 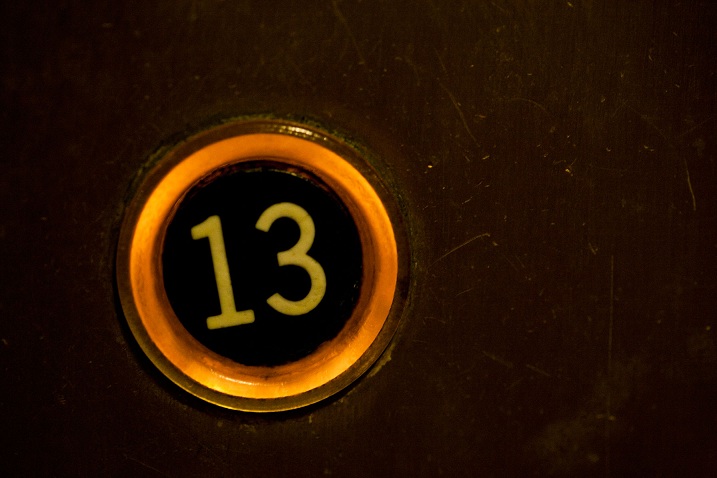 Building owners will often omit the 13th floor; instead, they will skip to the 14th directly after the 12th (the real 13th floor becomes floor 14). Yet others have found another way to get around the problem of the 13th floor: they give it another name, like “12A” or the Latin equivalent for number 13, “M”, and then the real 14th floor is named 14th floor. Some even close the 13th floor, and block access to it; it just remains there as an unused ghost floor. As a consequence, you will not spot number 13 in elevators and stairwells.

Number 13 is a bearer of misfortune?

Why do people go to such lengths to avoid having or using the 13th floor? In fact, their actions are motivated by superstitious beliefs, according to which “13” is a bearer of misfortune; they, therefore, do not include the 13th floor so that no ill-luck befalls them. This practice is specially common in the US.

The rumours about “13” carrying bad luck has led to a phobia known as triskaidekaphobia. People suffering from this extreme fear will be fueled by the desire to hinder the possibility of problems that they think will result from having a 13th floor; they believe that all sorts of troubles and difficulties will arise if one keeps an active 13th floor like lower property values, congested traffic, fire, robbery, the presence of ominous shadows, and even murder.

People suffering from this severe form of fear display symptoms of chronic anxiety when they have to deal with anything having to do with number 13: they will experience difficulty in breathing, nausea, vomiting, increased heart rate, and sweating. This is why people of this condition will come up with creative ways to not having a 13th floor.

What is the origin of the fear of number 13?

The origin of the fear of the number 13 is not established. It is said that it might have come from an old text named The Code of Hammurabi in which the 13th law was left out. Otherwise, 13 has often been associated with matters entailing negative connotations. For instance, Judas was allegedly the 13th person to take a seat for the Last Supper, and Loki was supposedly the 13th Norse god; people falling prey to these beliefs argue that all of this indicates that 13 is an evil number, and should not be used at all costs, not even in tall buildings.